“Baseball that’s gone bananas” is how The Savannah Bananas baseball team describes themselves. And who better to translate that silly, happy-go-lucky spirit to key art than Zachary Scott. Through exaggerated expressions, set design, image composition and color, Zachary’s personal humor is subtle enough to let subjects like the Savannah Bananas own style be the hero of the shot.

Zachary’s affinity for humorous imagery and his talents in composite photography created key art that have many different use cases. Outfitted with a branded Volkswagen Beetle, players on stilts and a shaken champagne bottle, the images for their new ESPN documentary show are the perfect combination of stylized conceptual scenes and vignettes that are sure to make you smile. Read on to hear some of the antics that happened behind the camera including how that shaken champagne bottle soaked Zachary and the production team.

"The final product exceeded our expectations. There was a joyous, constant creative energy throughout the whole process mixed in with multiple “WOW” moments as we were reviewing concepts, frames on set, mocks, designs, rounds of finals, and the animations that tied everything together really blew me away."

Were these shot in an actual stadium?

Yes and no. We were shooting alongside the video portion of this shoot so we set up a studio in one section of the stadium and laid out fake grass and a blue screen to resemble the lighting you would have in the stadium. Because we needed a lot of different people in each shot, we shot them all separately and then composited them together so each person was shot separately from one another. In the end, the field and stadium didn’t photograph that way we wanted it to, so I worked with CGI artist Michael Rodriguez from Comrade to create the look we needed. So yes they were shot in the actual stadium, but we ended up creating the background that appears in the final shots through CGI.

What does the process of creating a stadium from CGI look like?

It was really impressive what he was able to do. He created it from aerial renderings to figure out how the scale and then populated it with random people holding cell phone flashlights. We used some parts of the actual field and stands, but we knew we wanted to shoot it as a composite because we wanted to animate it. The layers made it much more manageable to animate and repurpose the images for the client. 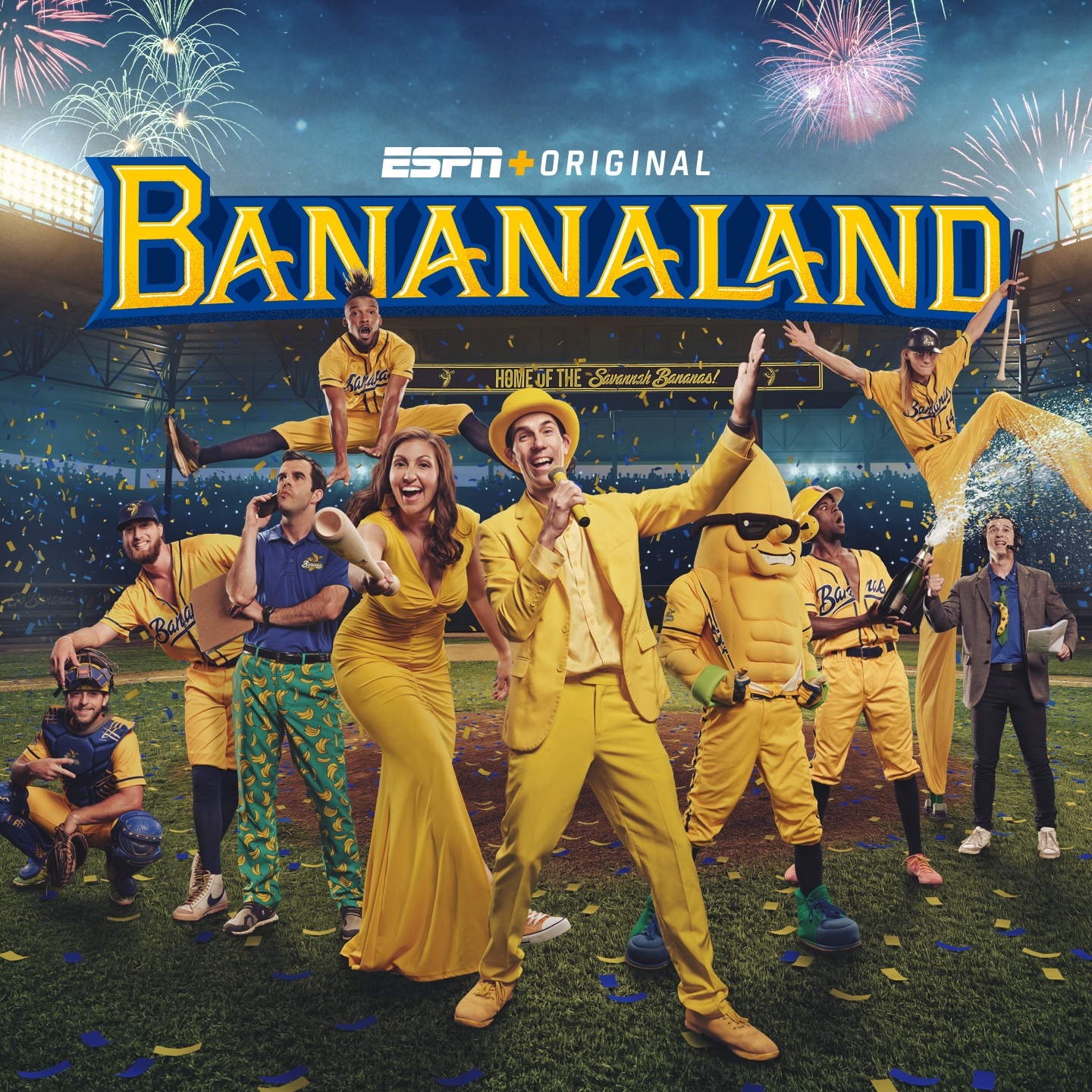 The energy on set was great. These players are true entertainers so they are comfortable doing the ridiculous things we wanted to include. For instance the player who is opening the champagne bottle actually did that. He opened up the bottle and champagne went everywhere, including my camera, strobe pack and all over the digital tech’s computer. Everything was super sticky but it was worth it for the shot.

We also had to be nimble and conscious of our time. We shot everyone separately, and then composited the images later on, which meant a lot of resetting lights for each person. We had about 15 minutes with each talent and had about 30 different setups. Remaining high energy and moving quick but focused as imperative.

What is the most important thing to keep in mind while creating imagery for television or movies?

Flexibility. When shooting key art, I typically get a pretty solid layout of what they want so I try to shoot some version of that. I always have to consider where the copy is going to go and then make sure I have as many versions of each shot as possible so the client can repurpose as needed. Since we shot each person separately it was easier to change the images as requested by the client.

What is your favorite part of working on key art projects?

My approach to photography lends itself to key art because you are trying to tell a very specific story. I view creative prompts as a puzzle and am excited at the opportunity to take the talent, set and props that I’m given to tell that story.

For some time, we've admired Zachary Scott's work for his creative scene setting, his ability to get a-list celebrities to do farcical poses and the stylized nature of his imagery. So when this potential partnership came about, we knew it was meant to be, and are excited to announce that Zachary is now a part of the Heather Elder Represents roster.

Zachary Scott has been shooting editorial the majority of his career. In fact, his oldest client is The New York Times Magazine, who began hiring him in 2005. He has always loved working with the magazine as it has introduced him to incredible creatives, allowed him to work with a-list celebrities and has given him opportunities to travel around the world. His most recent cover for the magazine is with comedian and actor Bob Odenkirk.

Zachary Scott has been photographing local animals for SLO Life Magazine's “Pet Collective” Magazine. One image, of Zachary's own dog Rudy, was selected to appear in the AI-AP 38 American Photography Print Annual